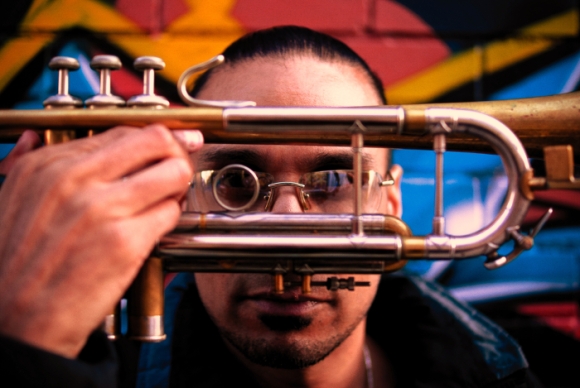 Brownman Ali is Snaggle’s ‘first call’ in our current rotating trumpet chair as well as our producer and CEO of Browntasauras Records.

Scott McLaren, host of “THE JAZZ JOURNEY” on CHRY radio writes:
“Born on the small Caribbean island of Trinidad, schooled in New York and now based in Toronto, Brownman is one of the most in demand, young jazz studio trumpet players in Canada today.  At the age of 25, he is also an accomplished composer/arranger and the recipient of the 2002 Canadian National Jazz Award (NJA) for “Jazz Composer of the Year”, also clocking in as first runner-up for “Jazz Trumpet Player of the Year”; his highly acclaimed latin-jazz group CRUZAO was also nominated at the NJAs in 2002, 2003 & 2004 for “Electric Jazz Group of the Year”.  2001 saw him win the coveted Montreal Jazz Festival’s  “General Motors Grand Prix Du Jazz Award” which led to his being signed to the prestigious Justin Time Records label. He was also the recipient of the 2001 CBC Galaxie Rising Star Award”.  2004 would bring CRUZAO a nomination at the Canadian Independant Music Awards for “Alternative Latin Artist of the Year” and his 10-man salsa outit – MARRÓN MATIZADO – would be honoured with the Silver Medal by SalsaSPOT.com for “Toronto’s Favourite Salsa Band”.

Brownman is one of the first calls for not only jazz and urban recording sessions (having affiliations at both SONY & UNIVERSAL Recording Studios), but also appears in the horn sections of countless latin groups.  His recording credits sit at just under 200 CDs (many nominated for Junos) and he is currently composing and arranging actively for 6 groups of his own, all of which have gained critical acclaim in their own diverse idioms – the multi-award-winning latin-jazz unit CRUZAO, jazz-hip-hop group GRUVASYLUM, mainstream NYC style hard-swinging trio & quartet The BROWNMAN AKOUSTIC TRIO / QUARTET / QUINTET respectively, the eclectic and electrified modern improvising trio in the spirit Miles Davis’ electric period BROWNMAN ELECTRYC TRIO, the 10-piece Salsa powerhouse MARRÓN MATIZADO, and the 15-man latin-jazz-urban orchestra CRUZAO GRUPO MONSTRUOSO.

Testimony to his extreme versatility, his just over 300 CD studio recording credits are in styles ranging from Be-bop to Acid-jazz to Hip-hop to Brazilian Samba to Cuban Salsa as well as performing on a number of major motion picture soundtracks, music videos and live television broadcasts.  His sound has been called Freddie Hubbard meets Randy Brecker & Clifford Brown with hints of Woody Shaw and is quickly becoming familiar to jazz, latin & urban music fans in Toronto and across the country as recordings he’s appeared on spread. His movie credits also include a cameo appearance in the Jennifer Lopez movie “Angel Eyes” and the 2002 CBC pilot “In A Jam”

Amongst a long list of mentors, Brownman has studied (and performed) with multi-Grammy-winning recording legend Randy Brecker (of The Brecker Brothers) in New York City, Brazilian samba master Claudio Roditi, Canadian flugelhorn great Guido Basso and with British jazz icon Kenny Wheeler while attending the prestigious Banff Center For The Arts 1995 International Jazz Workshop (one of only 3 trumpet players selected from world-wide auditions).

In 2009 he launched his own record label: Browntasauras Records, which saw the Electryc Trio’s two now celebrated recordings garner substantial accolades and press. The label is now a home to all his ensembles as well as the newly signed SNAGGLE. Now, using the label as a breeding ground for new and visionary talent in the modern jazz realm, Browntasauras and Brownman himself are widely regarded as vanguards for the evolution of Jazz in Canada.